Trisha’s guest this week is Scott Burgess, as part of the healthcare innovator series. His practice focuses on helping ourselves stay healthy rather than use the healthcare system. I encourage you to listen to what he has to say and consider it without judgment or figuring out how you might be able to make dramatic lifestyle changes right away. In 30 days, perhaps you can listen again and see what speaks to you. Maybe try one new thing for a while, see how it works, and then listen again. If nothing speaks to you, the benefit of this medium is that you can simply turn it off.

I think we can all agree that change needs to occur in our expensive healthcare system in the U.S. that is not producing any better patient outcomes. Clinicians are burning out, and costs are becoming close to 20% of GDP and unsustainable. The answer to the question is not clear. We can listen to how some people are making changes and see if what they have to say speaks to us. This is part 1 of a 2-part episode with Scott. 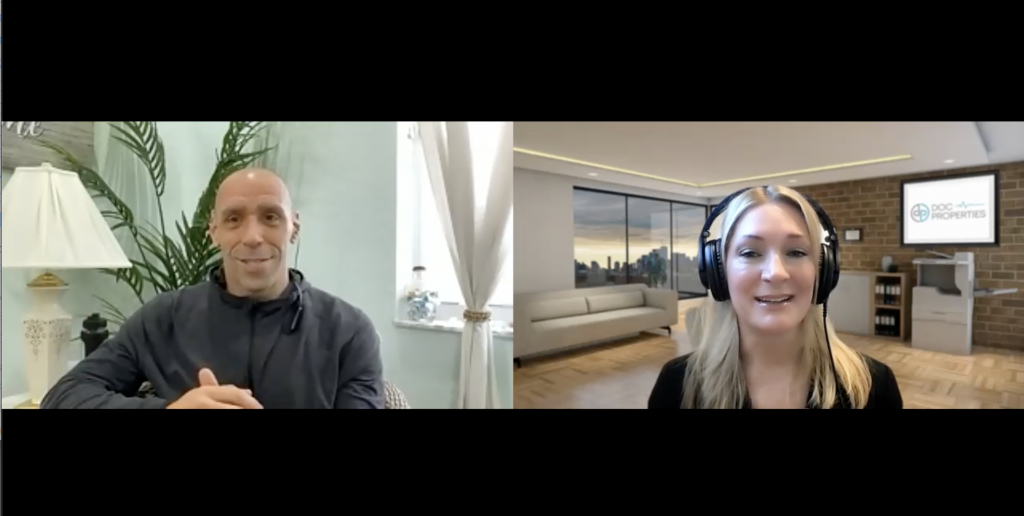 [2:59] How Scott decided to start his business

Scott’s media company is Healthcare 360. He has been in the healthcare industry for just under 20 years. Along with engineers and architects, he would help design new clinical environments within brick and mortar hospitals (e.g., operating rooms, emergency rooms). While in that position, Scott noticed there were several areas that could be improved upon. Even on a fast track, the timeline to create these spaces was anywhere between 18-24 months. Everyone on the team had the best intentions, but they always seemed to think someone else had the information. In reality, the only one who is really responsible for the information is the architect of record. They tried to cut costs, make things simple, and redirect everyone to one point of contact.

Scott also shared his experience and thoughts when they would offer to sterilize the entire space. Infection rates in hospitals were high, and reviews would have to occur where the hospital would gather information to determine whether an infection happened at the hospital or somewhere else. Their business offered to mitigate that risk by sterilizing and hermetically sealing the new clinical area. At that point, hospitals just did not seem to be ready for that technology.

In an early episode of his podcast, Scott spoke with a member of the Siemens family, and it came out that they had a data solution through the cloud. This system would make it easier for patients to walk in, show ID, and have all of their medical history listed out. No one was ready to buy then, and Scott was surprised to learn that.

As he thought through it, he saw that hospitals would rather build infrastructure, have to maintain that infrastructure, and  have to worry about online attacks and computer-based viruses versus throwing it up in the cloud. Hospitals were confirming that they wanted to own their information with a local repository. Now in the last few months, it seems like hospitals can’t get rid of data fast enough. Scott saw the gaps two years ago.

For years now, Scott has been studying eastern medicine and methodologies for health and wellness. Between when he started his podcast and now, his outlook on health has shifted. He sees healthcare now as managed sick care. If it doesn’t have a CPT 10 code, it doesn’t exist. So now, Scott wants to show people different pathways and show that you don’t need healthcare in its current form.

Looking at health holistically, diet, meditation, and different energy systems can all have an impact.  Scott points out that the body has the innate ability to heal itself. Eventually, he realized that there was something broken in the healthcare system itself.

[10:27] The need to incorporate wellness into the healthcare system

Scott explains that he has been an “insider” for a long time, and he has seen the managed sick care system up close. If you aren’t sick, the system doesn’t make money. “Wellness is external to the system,” he explains.  “The system is corrupt. The system needs to be broken apart completely, and wellness is now outside of…that story – what they call managed healthcare.”

We have seen the impact of pre-existing conditions during the COVID-19 pandemic, as COVID was more dangerous for those with comorbidities. Scott compared it to HIV, because people do not generally die from HIV. They die from the sub-categorical illness that they have been diagnosed with, and he sees the same thing happening with COVID.

Scott believes that wellness starts in your mind. When you get sick, it may be related to being overstressed. If you aren’t managing stress well and experiencing high cortisol levels, it affects your sleep, your nutrition, and your physical exercise. When someone isn’t feeling well, I would look at those four things to see what is out of balance. Consider whether you can make changes in any of those areas before seeking care from a medical provider.

We all experience stress, but the question is how we manage it. If you’re in a fearful state, Eastern medicine says that emotion is related to the kidneys. In the linear thinking of the allopathic healthcare system, they only consider what is wrong. From there, they make a diagnosis and then choose a treatment plan. Scott explains that Eastern medicine is more focused on clearing out the energy systems related to emotion. “Your physical is an example of your metaphysical,” he says. The idea that you need to clean out your energy is foreign for most people in the U.S. because they are used to doing whatever the doctor says they have to do to get better.

If he gets sick, the first thing he does is drink plenty of water so his body doesn’t get dehydrated. Water is the key to life. He also consumes supergreens like wheat, grass, and kale, as well as orange juice because vitamin C accelerates absorption. Then he rests and lets his body do its thing.

[17:13] How Scott practices wellness every day

The first thing Scott does is wake up and think about what he is grateful for. He puts his own oxygen mask on first by practicing self-care. He goes through his healing techniques, checking major areas of the body and making sure his diaphragms are aligned and his spine is in alignment. He thinks about where his emotions are coming from, and practices meditation and breathwork. Going inward, he is finding out where his emotion comes from, sitting with it, and observing it. He doesn’t drink caffeine or energy drinks, but he still has tons of energy all day. There is an infinite amount of energy around us, and when you find out how to tap into that through appropriate self-care actions.

Scott got this statement from a conversation he had with a podcast guest who was a former engineer for a large biotech company. From that conversation, Scott did his own research and found information that seemed to corroborate that statement. The healthcare system is designed around a code, and Scott says that medical diagnoses are generally unproven as far as where the conditions started.  The diagnosis system has a payment system aligned to it, and this is kind of where Healthcare 360 came about.

Another podcast guest shared with him that data shows that 83% of all patient consumers are highly dissatisfied with their level of care. We have all had the experience of making a 20 minute appointment with a doctor. He is 30 minutes late to bring you into the room and you get about 5 minutes of face time. That is our standard of care right now, and then we pay for someone to input computational information into a computer who really hasn’t assessed things.

Scott doesn’t like where healthcare is going. How is a doctor supposed to know everything that is going on with you from one 5-15 minute appointment per year? He feels we need more education on how to improve our immune system, and how to improve health in subjective and objective ways.

Back in 2007, the NIH received a major grant to understand the microbiome. If you know how the microbiome works and where it’s deficient, then you know how to build upon that. In the United States, our diet is full of a lot of processed foods. There are chemicals in the soil that is used to grow our food. We have these diseases that doctors don’t know what to do with, and it isn’t their fault. Doctors are given a linear system to work with, and these are complex, non-linear illnesses and diseases.