Trisha’s guest this week is Brian Howard, founder and president of Stage Equity Partners. His real estate investment company is headquartered in Chicago but invests in medical office buildings and healthcare real estate nationally. Brian shares the background of Stage Equity Partners and how he is able to respond to market conditions to make solid investment decisions.

[2:09] The story behind Stage Equity Partners

Brian was a real estate lawyer in Chicago, and he became jealous of his clients who were out and about doing deals and creating value.  He ended up working for a real estate developer in the area and learned the business.  Brian started his business in April 2009, bought his first building in 2010, and hasn’t looked back since.

While some investors are agnostic on asset classes, Brian deals specifically with healthcare real estate.  He wanted to differentiate his business by learning everything he could about one particular field and specialize in underwriting good medical office deals.

[6:04] Where Brian concentrates his national investment efforts and why

Stage Equity Partners is based in Chicago.  There are only so many deals in that area, and there is a lot of equity in town with really deep pockets.  He started out looking for deals nationwide, until one of his investors advised him to concentrate on certain areas of the country.

At that point, Brian started thinking about where people were retiring, where were the fast-growing states, and which states currently had an aging population.  With those metrics layered on top of one another, he decided to focus on Florida, Texas, and the Carolinas.

A few years ago, the company also took all of their property management in-house.  That move really solidified the benefit of having multiple buildings in a given market for scale, efficiencies, and cost sharing.  Any new market they go into now, they look into whether or not they can aggregate more than one building. There is a learning curve when entering a new market, so your time will be put to better use if you can have several buildings within that market.

[9:57] Flexibility to buy and sell in the current market

Opportunities have changed in the market.  When Brian first started, anything under $20 million was too small for the REITs or the dominant players in the industry.  A little while ago, it was $10 million.  Brian felt like he could comfortably play in that space without competing against folks whose cost of capital was a lot less expensive than his.

While he used to pretend that he would be under the radar of the REITs, Brian is now largely bidding on the same deals and against folks that may not have looked at those deals previously. He describes the perfect deal as anywhere from $10-20 million, largely stabilized, maybe a little bit of value-add and a way to boost the NOI a bit and create a little bit of a premium.  Ultimately, he would want to buy a few more deals in that market and package them up in the future.  Every deal is a stand alone investment, but to get a nice return on investment you have to accept when you have enough term and value left for the next buyer.  At some point, you have to sell.

[10:43] Offering physicians ownership in his properties

This is something Brian has done for a long time. Stage Equity has had tenants invest in buildings, and often it can be done on sale leasebacks. When you buy from a physician group, sometimes there are younger physicians who have never had the opportunity to invest in the deal before and they are planning to be there for many years.  They have the opportunity to co-invest on the development side.

A lot of physicians look at it as if they’re paying rent, so they may as well get a return on a deal of vacancy without having to be in debt.  They don’t have to manage anything or deal with capital liability. Brian looks at all the tenants as partners in the deal anyway, so he is comfortable allowing physicians to be partners in the equity side.

They bought a surgery center, had a 10 year lease, and owned it for 7 years. A couple years ago, they were told they had to improve the lobby. They were quoted about $250,000 for the upgrades. That’s when a light bulb went off. We had some funds available, and we offered to pay for it in exchange for tacking on some extra years to the lease that would then help us with our loan. They were thrilled that they didn’t have to spend the money, and we were thrilled because we were able to sell it within 6 months of that transaction.

Brian describes March and April of 2020 as the most difficult operational time he has had in his business. In 2009 and 2010, doctors still chugged along despite the economic crisis. People still went to see their physicians, so healthcare was able to maintain its viability.

The COVID-19 pandemic was a healthcare crisis.  Doctors couldn’t work, and nobody had ever dealt with this issue before.  They had physicians calling, physicians who were partners on deals calling, and hospitals calling.

Stage Equity Partners worked with all their tenants to make sure they got their PPP loans or were able to do telemedicine.  They deferred a lot of rents through 2021 – not necessarily abating, but allowing for them to pay later on.

At this point, everyone has either ramped back up or sometimes even exceeded where they were before. The experience has changed Brian’s approach to pursuing opportunities, because he is now more careful to scrutinize a tenant’s financials and and rent coverage, balance sheets, and retained earnings has heightened a lot more scrutiny than profits.

Overall, he thinks this is a good change in the industry.  A lot of the private equity backed tenants with weaker balance sheets got exposed.  He lost a tenant that was over-leveraged and could only sustain 3 months of being shut down.  While a casualty like this during the pandemic is largely inevitable, Brian hopes to continue to guard against situations like that as much as possible.

Brian continues to expand his team, and he is also looking into investing in other asset classes. He has looked into senior housing, labs, and ancillary services, but for now he has always fallen back on his comfort zone of healthcare.

He is starting to look at other assets to see if they can get a better yield with lower risk, but right now healthcare real estate is really hot.

[23:01] The outlook for healthcare real estate

Our population is getting older, and therefore we will continue to need medical services.  While telemedicine is likely here to stay, Brian doesn’t think it will replace all office visits.  Healthcare has shown itself to be a very durable asset class and it has attracted endowments and a lot of foreign capital into the space.

Brian shares that he would feel really good about owning a medical office in a good market with a good tenant for a long time.

When Brian was 14 years old, he worked as a dishwasher at a diner  in Detroit, Michigan. The experience encouraged him to make some different choices and to work harder in school so he wouldn’t have to do that job in the future.

[25:41] What Brian would be doing if he was not working in healthcare real estate

If he wasn’t in real estate, Brian thinks he would make a good dentist.  He likes the lifestyle and he believes he could be an entrepreneurial dentist who owns a bunch of locations. Brian shares that he would also enjoy the social and medical aspects of being a dentist.

Brian recommends checking out Shoe Dog, by Phil Knight, about the founding of Nike. He also really enjoyed The Ride of a Lifetime by Robert Iger, former CEO of Disney.

Brian meditates every day for 5-10 minutes using a guided meditation app. He feels like this practice allows him to sleep better at night and become less reactive and more present.

Leadership, Brian believes, is a hard skill to master. To some extent, he believes people are born with an instinct to want to take charge. You have to constantly learn different skills for different situations. As companies grow, you have to lead different people or teams in different ways.  A leader is always adapting. 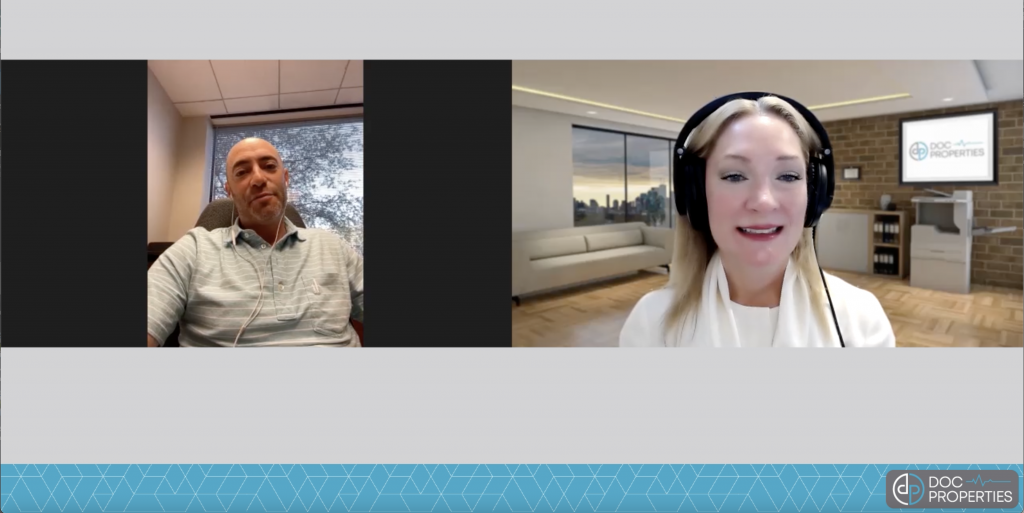